An attitude for survival.

A few years ago I faced, without doubt, the most dangerous crisis in my life at sea while in Command. Later, even after the dust had settled and the emergency forgotten, it took me quite awhile to analyse events; this happened slowly and long after the danger was past. Looking back at similar events in my career, I realised that while there are the inevitable 'what ifs' and 'maybes' to any such situation, there are many commonalities to an emergency too.

A break up of these common factors will have, usually, some or a combination of these elements: Long before the event, a safety element or two disregarded or underplanned, commercial pressure, fatigue, incorrect advice from ashore and mistakes made on board; sometimes numerous small mistakes which add up to a potential catastrophe. And luck.

During the emergency, a few of the crew will think and act appropriately on their feet, some will be beset by inertia and paralysis; annoyingly, some of the time will be consumed by sometimes useless communication. Other factors like fatigue, stress, equipment problems and morale are also common. And luck.

After the emergency, the management of the incident on board and ashore, operationally and otherwise, is the main imperative. Unfortunately, we tend to ignore one factor, a human one; the long term effect on the crew of a stressful life threatening situation.


It is easy to say that a Master, like all other seafarers, is trained to deal with emergencies, and stop there. My brief here is not to dispute the adequacy of our training, though I could well do that, it being a view I hold. However, my intention here is to suggest what I believe are good steps which should be taken on board in handling emergencies. That is, in addition to what we normally do.

I hasten to add that what I say is not meant to be a manual of any sort; just small things which I believe make a big difference. Though written for Masters, this may be helpful for everybody on board.

(I must stress that these are just some of the steps which happen to work for me and that I believe that there will be better and more cogent solutions from better Masters than myself. It is a pity we don't have a professional forum to tune this list and make it much better. We really should.)

· I would put a 'Command mindset' on top of my list of essentials. Frankly, this includes the ability to say NO when safety or integrity is involved. No to everybody, from God to the Devil. Masters must learn to say no. This has to be cultivated in oneself beforehand; when the faecal matter hits the fan it is usually too late. Plan for safety. Say no to everything which comes in the way, including to the owners. That is part of your job. The thought should be: safety is my job and my responsibility and my decision. Inputs are welcome (provided they don't become useless and time consuming communication, especially in an emergency) but, in the end, this baby is mine.
· Safety is a continuous process. Plan beforehand. Do attend routinely to commonly downgraded or taken for granted (in today's busy commercial world) aspects of cargo, lashings, cargo shift possibilities, free surface effects in tanks, stability, watertight integrity, soundings, ventilation, securing high splash areas like the fo'cle and weather routeing services. Ignore checklists for this purpose. A Master's routine rounds starting soon after sailing works much better. Push a safety culture on board which stresses the importance of doing the basic things right. This is more important on short sea trades where routines are prone to be ignored. Anybody who has sailed in areas like the South China Sea or the North Sea on short sea trades will agree with me that weather does not look at the trade and neither does a fire, and that a typhoon can kill you as surely ten miles from the coast as a hundred.
· Be on top of safety issues unique to the kind of ship or its run. Educate yourself beforehand; if required, ask for information from the office.
· Do not accept dangerously low fuel reserves. Another common pressure tactic utilised which we often tend to succumb to. A voyage can easily take a few days longer, and often does. Fuel consumptions can be higher than anticipated for a variety of reasons. I for one don't want to run into bad weather and worry about running out of fuel at the same time.
· Make the fact that safety is your priority known to the officers, crew, managers and owners in said and unsaid ways. By doing so, you draw a line in the sand politely; it makes your life easier. In any case, you will be surprised how many support you even as some others will apply commercial pressure on you.
· Keep yourself updated regularly on board of deck and engine machinery problems. Build a rapport with senior officers for this purpose. (Avoid the CYA or blame game. It is a game with no winners.) An overview of possible problems is essential for a Master to gauge cascading effects of these and also to handle emergencies. Synchronicity of events can kill as surely as an explosion. 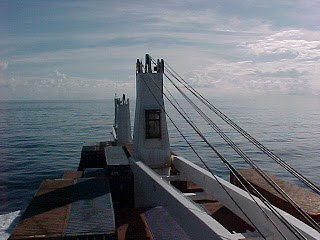 This is not, as seen in one Cadet's dubious training text book, an exercise of "If the ship runs aground, stop engines immediately". This is a mindset exercise for professionals. My suggestions here:

· Think. Don't let yourself be overwhelmed by minutiae. Think about what can get worse, what else can go wrong and what your options are. Think ahead and be prepared. Shortlist reliable officers and crew in your mind for critical tasks. Keep thinking, like a chess game, as many steps ahead as you can cope with.
· Remain in Command and keep morale up. Keep calm. Panic spreads. Cultivate an attitude of 'us against the world' on board at these times. This keeps morale up as much as anything else, in my experience.
· Coordinate. Self explanatory, really, but what is not is that an individual's ability to multitask becomes critical. Speed and accuracy are vital here.
· Keep spare bandwidth. Don't run on top gear but keep some physical and mental reserve. You will probably need it sometime, and then you can move into top gear for awhile. This helps you keep physical and mental control, too.
· Seek information and opinions from on board and ashore, if required. Be aware that some will assume you are trying to pass on your responsibility by doing so and will bring this up much later as a Command failure. This does not matter. You are solving the problem. Besides, dogs bark. The caravan passes.
· Solve the problem and forget the peripherals. The smaller or the less important stuff, like heaven, can wait.
· Delegate. We are dependant on very basic things as well as big ones at sea. Everything from a torch and a walkie talkie to an Act of God can be critical at different times. So, delegate the small stuff to junior officers and the medium level stuff to seniors. Do not delegate a Master's decisions and actions; those are yours alone. If you start delegating these you start losing your authority. Chaos and panic can result quickly.
· Keep a log and records; this can also be delegated. Take photographs if possible and applicable.
· Be aware that some ashore will already be preparing for financial catastrophe while you are fighting for your life. That’s ok, that is their job. However, it is not your priority, so minimise non essential communication with shore/commercial interests. In fact, minimise all communication with shore unless seeking information, especially specialist information. Tell them so. Your concentration should be on the problem in your face. Do not let communication paralyse action.
· Be aware that you will hear, "Captain, you are in command, it's your decision" more often. Be well aware of the reasons for this statement, and for the fact that some firms will be recording what is being said on the phone.

· Make a conscious effort to defuse the pressure the crew has been under.
· Be aware much of the crew, and you may be suffering from PTSD (Post Traumatic Stress Disorder. I would advise any Master to have a basic knowledge of its symptoms. When it first hit me many years ago, it took me awhile to recognise what it was). Be aware that the maritime world will do nothing to address this; a seaman is expected to be the strong and silent type, and get ulcers.
· Be aware this is the time personnel problems will surface on board. Release of pressure can create its own problems.
· Be aware that many interests will now start playing the blame game and 'protecting their interests', often a euphemism for blaming the crew if they can.
· Stand up for your crew and officers who have performed well under pressure. And stand up to those who try to point unfair fingers at you.


And, when the accountants and their calculators take over the ship, take a minute to be satisfied with yourself. Leave the self analysis for later; it is too soon right now. Distance lends perspective, and one needs that if one wants to learn from this incident.

In closing, and as said before, this article is oriented more towards a workable mindset than a checklist for action; we already have enough of those, though shipping casualty rates continue to rise worldwide inspire (or maybe because) of them.

My suggestions are a psychological exercise; an attitude I find useful to have when Joyce's "scrotumtightening sea", or indeed any other crisis, comes knocking on your door.


Sometimes, the right attitude is half the war.