Giving the sea-dog a bad name

I promise not to repost old posts again- at least not soon!- but this is a 2012 one I was forced to recall today. 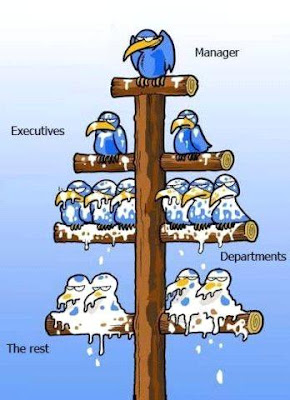 The notion that a ship's Captain is similar in quality or character to a shore based CEO or senior manager is hogwash that has been promoted by the STCW 'management level' certificate claptrap for far too long. Perhaps this way of defining responsibilities at sea may find some takers among sailors who have a complex about their jobs being inferior to those ashore, but as far as I am concerned, this narrow profiling actually devalues what they do. Because I believe that a Master's job is tougher than a CEO's. In fact, the nuances in leadership, strategic or tactical thinking, physical action and mental agility required of a ship Captain- or, indeed, of any rank of officer or crew at sea- are unique. The 'management' or 'operational' level labels are plainly inaccurate. This is not an office, where a manager does no manual work. This is a ship, whose senior most officers often live in boiler suits these days.

A CEO ashore is probably responsible for larger amounts of money, but no CEO lives, works and eats with his workforce. No CEO faces the same living conditions as the shop floor worker. No CEO suffers acute fatigue and loss of sleep for prolonged periods while making major decisions that affect directly the physical safety of everybody around, including himself. No CEO picks up a screwdriver at work one minute and handles a multimillion-dollar floating behemoth the next. No CEO makes huge decisions all on his own. No CEO is required to be- within any 24 hour period- alternately a clerk, an operator of machinery or equipment, a HR man, a security in charge, a factory manager, a data entry operator, a communications officer, a cashier, an accountant, a payroll controller, a policeman and an environmental mini-specialist. No CEO is required to work while spending months away from his family at a stretch. No CEO will be arrested for even a major disaster- leave alone a minor accident- in most parts of the world: Bhopal, for example. Hell, a CEO does not even stand on his feet too much or too often; he travels, works and lives in a soothing atmosphere with minions to take care of everything, including his cup of coffee. A  Shipmaster, on the other hand, works in a hostile environment- physical and mental both- that is magnified manifold by most of the people he encounters that are not part of his crew- the antagonistic enemies at the gate.

You may choose what you consider to be the more important job here; my only point is that any sailor's job cannot be compared with any job ashore- and promoting that thinking does every seaman an injustice, is inaccurate and pushes the wrong idea- to prospective and existing seafarers both- of what a mariner's working life is all about.

Actually, I cannot think of any job that compares with a sailor's. A soldier's?  Some similarities do exist here- away from family in a hostile environment, for example, but there are massive differences too. A sailor will not be called upon to face bullets as part of his job description, piracy notwithstanding. A solider's life is simpler than a mariners- no commercial, environmental or such considerations and no job insecurity. On the other hand, although a Bosun's job is more complex than a platoon leader's, the latter is responsible much more for the lives of all his men in combat, and the cost of a mistake- or circumstance- is much higher. In a similar vein, a General is far away from the action, usually, unlike a Shipmaster, but he is responsible for hundreds or thousands of lives and his country's security- a huge responsibility. So, no real parallel exists here either.

I suggest that we should not even try to find a parallel. Instead, we need to realise that a mariner's job description and responsibilities are unique and leave it at that. A formal job description is required only when there is ambiguity or confusion about role, and shipping has never suffered from that problem. Just say Chief Engineer, and every sailor on earth will know what that man does, his responsibility and his authority. This is true for all other ranks, and on any ship on earth.  We don't need organisation charts at sea; we know clearly what everybody is responsible for.

Unfortunately, what has happened is that shipping has fallen into the management jargon trap where style substitutes for substance- or too often replaces substance. The result is not pretty and is there for all to see. Crews are today groaning under the weight of manuals and checklists that have dubious value but enormous repercussions thanks to stress and fatigue that are a direct result of this nonsense. I see the 'management level' certification and the 'CEO' pretentious blah as an extension of this thinking.

It may seem like a small thing, the wording on a certificate of competency, but it does matter, and I object strongly to it. Not least because I am a Shipmaster by qualification and profession, not a mere CEO.
.

That brings back my flight instructor's comment, when teaching on the pilot-in-command's responsibility to obey Air Traffic Controllers' instructions, within reason: "At the end of the day, his chair rolls on concrete."