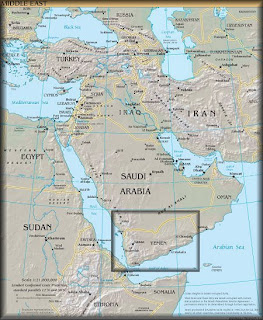 Starting almost a year ago, I have been trying to periodically spotlight the strategic, logistical and financial partnership that exists between terrorism and Somali pirates and why that relationship can easily become the greatest organised threat to commercial shipping in living memory. I am sure professional security analysts have been beating this drum for much longer; what continues to alarm me is that, so far, there is not even a public acknowledgement from either the IMO or any other apex maritime body that this threat is even real. There is not even a hint of a counter strategy from the community. The heads remain in the sand. Meanwhile, the situation on land in Somalia has gotten worse with jihadi organisations expanding geographically and clearly linked to piracy: indeed, getting a cut from it. But that is not all.


Across the water, in Yemen, the Al Qaeda released an audiotape last month. Called ‘To our people in the South’, the tape encourages Southern Yemenis to secede from Yemen. Abu Bashir, the Al Qaeda leader in Yemen, said in the tape that only the Islamic Sharia was the way out of oppressive government policies, and that Yemeni President Saleh was an infidel apostate supporting the US.


Yemen, as I have said earlier in this column, is much like Pakistan. An unstable and poor Islamic country with longstanding proven links to Al Qaeda, the country had, at one time, even a ‘peace pact’ with it. Like Pakistan, Yemen has been a haven for jihadis for a long time; training camps similar to Pakistan’s are supposed to be in existence there still, although much reduced after US special forces trained local law enforcement. Yemen is also the ancestral homeland of Osama Bin Laden. (In fact, I once took a taxi in Mukalla and found OBL’s photograph displayed prominently on the dashboard, strikingly akin to how Indian Hindu cabdrivers sometimes display pictures of their gods). Yemenis, like many Pakistanis, see the war against terror as a US war and not a Yemeni one. Like Pakistan, it did a hypocritical volte face in the aftermath of 9/11 and in the ‘you are either with us or against us’ era of ex President Bush. Like Pakistan, it has been subject to US drone attacks targeting terrorists.


It has also been the country of the US embassy and the USS Cole bombings, and the country from where at least some of the arms and personnel that end up in Somalia pass through. Yemen has also been a traditional and major supplier of fighters and suicide bombers for jihadi organisations worldwide. A former Guantánamo Bay detainee, Said Ali al Shihri, is the deputy leader of Al Qaeda’s Yemeni branch; almost half of the existing detainees at Gitmo are of Yemeni origin. Shihri has been trained in Afghanistan where he went, like so many others, through Pakistan.


The US has blamed Yemeni authorities in the past for letting terrorists escape from prisons there. And, just last week, as many as nine foreigners, some working in a hospital in Yemen and earlier kidnapped, were killed; these included three children. Although the government has said this was the work of rebel Houthi militia, experts abroad say that the modus operandi doesn’t quite match, and the killings may be the work of Al Qaeda in Yemen.


To add to the murkiness, Yemen shares a long border with Saudi Arabia, another country that has more than its share of links to terrorism, and which has, in fact, supported one side over another in the civil war that has raged intermittently in Yemen over the last many years. Sea borders with Somalia are porous; human and other trafficking remains commonplace despite the coalition presence in the Gulf of Aden. Yemen is also a natural bridge to Africa for the Al Qaeda. In any case, many North African countries, with large Muslim or Arab populations, have major elements within that have traditionally supported hardcore ideologies including Al Qaeda’s: Egypt with its Muslim Brotherhood, Sudan which sheltered Al Qaeda at one time, Somalia with its civil war and its Al Shabaab; the list is extensive.


However, all this is hardly unknown, so why am I getting worried now?


This is why: One, the Bab el Mandab Strait is around twenty miles wide, and, as we well know, is the only entrance into the Red Sea (and the Suez Canal) from the Indian Ocean. With Somalia on one side and Yemen on the other, it is the chicken’s neck: get a grip on it, and you control access to the entire Red Sea and westwards to the Suez Canal. The portents for commercial shipping and the oil trade could be cataclysmic if these critical straits were to become a war zone, or if the Strait was to be choked by militancy or terrorist attacks. This has already started happening. More later.


In 2002, the French tanker Limburg was suicide bombed by Al Qaeda off Yemen; one crew died, 12 were injured and 90,000 barrels of oil was spilled. Care to imagine what would happen if this became a weekly occurrence? (Can’t happen? I beg to differ. Today, a quarter of all pirate attacks on merchant ships are successful. The number of attacks this year has already exceeded those in the whole of 2008. What if the pirates had blown up the Sirius Star instead of demanding ransom? What if Limburg like incidents become common?)


Two, and although I would normally not dare to try to underline geography to the marine community here, consider this alarming reality. Near Yemen are located the following countries: Saudi Arabia, Somalia, Sudan, Iraq and Oman. A little further, Iran, Afghanistan, Pakistan, Syria, Israel and Palestine. Given the events of the last few years, a massive part of the world from the borders of India right up to the Turkish border seems to be close to going up in flames. I believe that Al Qaeda and other such elements have planned for quite some time to further expand the kill zone southwards. Somalia and Yemen first.


Three, and most importantly, the terrorists seem to be winning. Pakistan and Afghanistan may be on the global radar now as countries where the West is losing the war, but Somalia and Yemen are not too far behind. Not to speak of the quagmire that is Iraq, which will probably flare up as the US deadline for withdrawal approaches.


But don’t take my word for all this. Listen to what some experts are saying: that piracy threat perceptions should be enhanced (although it worries me that there seems to be a conspiracy not to mention terrorism and piracy in the same breath even now: one can draw one’s own conclusions why this is so):


And so, Hans Tino Hansen of Denmark’s security firm RiskIntelligence says that although there is more information available on piracy than ever before, the situation has never been as bad as it is today. Hansen says that there could be as many as 314 attacks this year; his firm’s figures are higher than the IMB’s which only takes reported attacks into account.


And so, the coalition Maritime Task force issues an updated Special Maritime Advisory message recently, which indicates that the pirates could be moving into the Southern Red Sea. This is not speculation: a ship has already been attacked and six attacks within a period of twenty four hours were reported this week from within this area. As if this expansion Westward were not enough, another ship is hijacked off Oman to the East for the first time ever; well outside hitherto piracy prone areas and alarmingly closer to the strategically critical and oil rich areas of the Persian Gulf. The Charelle was taken just sixty miles off Sur.


And so, another well known expert on Yemen says that Al Qaeda is bringing in Saudi fighters to Yemen and “They want to start to use Yemen as a base for attacks throughout the region, including Saudi Arabia and the Horn of Africa”


Yemen. A poor Muslim tribal country with a history of civil war, a weak government, easy access to arms (arms souks are very common), a history of jihadi support, the birthplace of Obama Bin Laden and with porous borders and a history of terrorist attacks against Western interests. Like Pakistan, it can easily fall into unstable anarchy. As in the case of Pakistan and Afghanistan, a stable Yemen does not suit Al Qaeda. It will do what it can to create civil war again in Yemen with the aim of controlling the Straits of Bab al Mandab from both sides: the chicken’s neck is to be choked between Somalia and Yemen. As in Pakistan, the extremists have already reportedly infiltrated the Yemeni security apparatus. Al Qaeda has now called for civil war in Yemen. With the expansion of its satellites within neighbouring Somalia, Al Qaeda is clearly winning the battle for the Horn of Africa.


If Al Qaeda remains unchecked, merchant shipping in the region will be a prime hostage. Combating piracy, which we do so imperfectly even today, will become a guaranteed and never ending nightmare for us.


Why the international community is not up in arms demanding action against this crippling and very real possibility is a mystery to me. Perhaps the shipping community needs to direct their focus on the problem. We should; we stand to suffer the most in this war.