I first tried keeping all the provisions unlocked at sea well over a decade and a half ago, and have done so on many of the ships I have sailed on; maybe even most of them. I feel that as long as we can afford it, people should be free to eat what they want and when they want it.

My initial proposal of keeping everything including the reefer compartments unlocked has been met with widely varying responses on board and ashore. Many Chief Engineers are unhappy at the possibility that crew would not properly shut the provision reefer compartment doors and that the fridge machinery would get knackered. So far, the first has sometimes happened but never the second.

Most cooks and many senior officers have felt that consumption would shoot up through the roof. Sometimes it has, initially, but never for long. When one knows one can eat whatever and whenever, one does not use one's stomach for storage.

Some cooks have felt that some essential items like milk and juice, and some 'luxuries' like ice cream and yoghurt would be polished off, leaving the entire crew then short supplied during a sea voyage. True to an extent, but we have compensated by ordering more of these goodies initially and until the system settles down.

Relieving Masters have often been almost annoyed at my immaturity. There is also a common refrain of, "Then how do you manage?" I have been unable to determine what has to be managed when everything is kept open to all. The guys making a cut on the provisions purchased are obviously unhappy, too. I don't much care; I am paid for the duration of my contract, not theirs, and I am certainly not paid to promote corrupt practices.
Besides, I do not manage. The cook does.

Generally, most of the other officers and crew have been delighted.


Much as I prefer to keep everything unlocked, I have decided against doing this on a few occasions. This is invariably when the objections from a Chief Engineer have been very strong on keeping reefer compartments locked. I must say that most of the initial naysayers are happy to give my proposals a fair chance and often change their minds once it is successful, but there have been times when I have been unable to persuade a Chief to do so. I scrap the plan, then, on the principle that a person responsible for machinery should have some say in what is being done to it. I admit, though, that I am disappointed at this intransigence. Old habits die hard.

The success rate of this initiative has been a hundred percent. Not once has the provision room been locked after it has been thrown open; not once have any crew misused their free access to provisions in any significant way.

And we have saved money. So much so, that I started distributing gifts every two or three months to the crew out of the saved cash. Depending on various factors like the cooks efficiency, wastage and costs of provisions on the route, these gifts were often significant. I remember, once, a Chief Engineer and a Chief Officer going ashore and spending about three thousand dollars on gifts for the crew; the same gifts for everybody on board.

Superintendents and company reactions, too, have varied. Some have been happy, others not so. Overall, they have been remarkably supportive.

I explained once to a Superintendent that my options for the saved cash were either
a) Leave it on board to be misused by somebody or
b) Misuse it myself or
c) Return it to the Company which may then think their allowances were too high and act against crew interests.

I explained to him why I felt that none of these options was preferable; besides, it was only fair that the crew that saved the money should benefit from it.
The Superintendent in question seemed to agree with me, as indeed most companies. In any case, they did not disagree too vehemently, because not one has instructed me, ever, to stop my system.


Perhaps there are many Masters doing this already; I simply do not know. Many may be doing much better. Nonetheless, at the risk of preaching to the choir, let me detail my experience with this system a little. 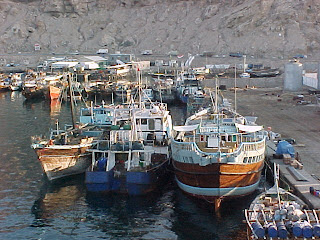 1. "Just like at home" is my first presumption. At home, one does not buy ice cream or expensive seafood, put it in the freezer and then instruct the family not to eat it until it is given to them. If we cannot afford it, we do not buy it. Once bought, we don't buy it again if we can't afford it, or not this month anyway. I do the same thing on board; the crew may get expensive stuff to eat as long as it is affordable. Trust me, everybody understands this concept perfectly.
2. One assumption is that there is be no psychotic amongst the crew who will throw all the meat overboard one stormy night. Of course, assuming this at the outset is paranoia.
3. The cook is competent and will surface teething problems to me reasonably quickly.
4. The fridge is not so isolated that a door mistakenly left open will not be noticed for hours on end.
5. It is preferable, but not necessary, for a 'Mess Committee' to be actively and concurrently involved in purchases and getting crew feedback. It is also much preferable for a full list of inventories of purchased provisions, including prices, to be available to all in the smoke rooms at anytime. The system works much better when it is fully transparent.
6. A good monthly inventory is a must, for budgetary reasons.
7. An important assumption: that the victualling amount provided for is sufficient for the ship and the run. (I have never seen one that was not.)
8. It is much preferable to have, as far as the run of the ship allows, minimum provisions on board at the end of every accounting month. Obvious advantages of easy accounting and flexibility in the next months purchases. Difficult sometimes, when one is departing a cheap port in the last week of a month for an expensive one.

1. Promotes integrity.
2. Promotes transparency. Excellent fallout advantages in other areas on board.
3. Promotes trust, which is, on its own, a very good idea.
4. Treats the crew like family. Eat what you want, when you want it.
5. Decreases a Master's workload. The only thing I have to really do is to watch the budget. The rest is taken care of automatically.
6. There are no excuses for bad food except bad cooking, because the Master or anybody else is canceling almost nothing.
7. I find that the crew makes a conscious attempt not to waste food and save money. Savings will come back to them in the forms of boxes of mineral water (depending on the run, drinking water supplied from ashore can be very unhygienic, as we know), chocolates, cookies or other eats in the cabins, or as presents, anyway.
8. Crew morale: This one should not be underestimated. When junior officers, how many of us have come back from work to find no milk in the refrigerator, or no juice? Just bread and butter. Sometimes not stocked, sometimes inadequately stocked and sometimes just plain consumed. In an era where there is no difference between day and night operations in port and even at sea, and when crews are short manned and overworked, it is ridiculous to follow the old 'quarter ho gaya sahib' routines of Indian companies, when trays were carried for officers to the bridge or engine room, and when provisions were dished out like at government ration shops for the crew. We all know of the games played in many of those ships. Therefore, any crewmember who can sit down and eat a decent meal after work (and whenever he wants to) is a much happier person, for he is being treated like a human being.

I must end with the story of a ship partly on the India run, where we happened to manage a particularly eclectic and quirky menu. It was customary, for example, to see a bunch of Filipino crew eating beer mugs full of Kwality Wall's pista ice cream for breakfast! Like delighted schoolchildren cocking a snook at the establishment and the headmaster. Offering each other more, bringing in leaking cardboard packs from the galley. I ask you, what could be wrong in being happy and content with small things?

In these days of minimal shore leave, food and victualling on board is more important for crew morale than ever before. The Master's responsibility is ensuring the quantity and quality of food, and the cook's job is cooking it hygienically and well. If, in the process, administration of the exercise is reduced, it is icing on the cake. In the end, this is a small matter; let us stop being control freaks and treat it as such.


I guess some of these views may be a little extreme. It has been indicated to me often enough.
All I can say in my defence is this: if I must be an extremist, I prefer to be one at the cleaner and more transparent end of the spectrum.

Email ThisBlogThis!Share to TwitterShare to FacebookShare to Pinterest
Labels: Master