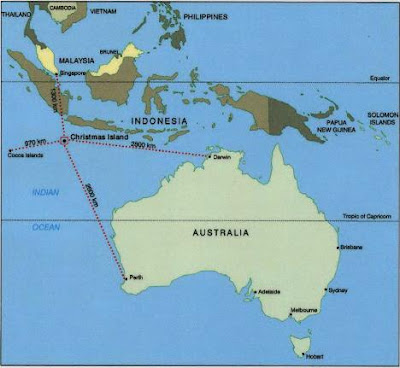 With more than 300 boat people having died route to Australia this year alone, the refugee crisis there does not seem to show any sign of ending.  Thousands of refugees– mainly Afghans, Iranians and Sri Lankans- continue to pay up to US $ 5500 each for the perilous journey from the Indonesian island of Java to the nearby Christmas Island, the Australian outpost close to Indonesia where asylum seekers are detained and processed. Almost two thousand arrived in Australia in August, the highest monthly total on record. Almost ten thousand have arrived this year already, more than double the figures for the whole of last year. Hundreds die during the transit. Official figures say more than 600 have perished since 1999, but who knows for sure?

Outside Australia, the plight of these refugees has been largely ignored thus far. That is nothing unusual- the same attitude has forever been on display towards the thousands of seaborne refugees that cross waters across the world every year, whether in the Red or Mediterranean seas or Central America- and the same attitude was on display towards the original boat people- from Vietnam, Cambodia and Laos-a few decades ago.  (Even as I write this, a stuffed illegal immigrant boat has sunk of  Turkey’s western Aegean, drowning at least 58; scores of others are missing).

There are the usual tales today of capsized or disabled boats, distress calls, people smugglers abandoning their cargoes at the first sign of trouble, rickety overcrowded boats and tens of men, women and children drowning when their boats literally fall apart. The shadowy kingpins behind this human smuggling racket include a Pakistani based in Indonesia; a regular ploy is to bring the boats close to Christmas island and send out a distress signal, sometimes even by mobile phone, and wait to be rescued.

The Australian Maritime Safety Authority and their Indonesian counterparts-BASARNAS- have obliquely and not so obliquely blamed each other for either abandoning the refugees or promoting calculated delay in rescue with the intent to discourage the boat people. Meanwhile, boats are being intercepted by the Australian navy almost every day.

In Australia, there is political acrimony and a hardening of positions with respect to the boat people on one hand and consternation over the humanitarian crisis on the other. A decade old plan- the ‘Pacific Solution’ that calls for refugees to be sent to Nauru and Papua New Guinea’s Manus Island for processing at detention centres- has been revived. Australian newspapers are meanwhile reporting the body count religiously, while the authorities are hoping that the recent spurt in the numbers of boats will reduce substantially because the refugees have been so far trying their best to make it to Australia before the ‘Pacific Solution’ was reimposed. Now, it has.

The story of the Wallenius Wilhelmsen owned car carrier Parsifal last month should have brought, especially to the shipping industry, the crisis in sharp focus. The Singapore registered ship, with a crew of just ten, picked up 67 asylum seekers off Java after a distress call. En route to Singapore, the Captain diverted the Parsifal to Christmas Island fearing for the safety of his outnumbered crew after what was reported as aggressive behaviour by the refugees who wanted to go to Christmas Island. As it turned out, a couple of the asylum seekers had threatened to harm themselves, not the crew, though obviously the situation could have escalated rapidly.

The Parsifal story mirrors tale of her sister ship Tampa, owned by the same Wallenius Wilhelmsen, that had precipitated  a political storm in Australia when she tried to take 438 Afghan boat people to Christmas Island way back in 2001. The then Australian Prime Minister Howard sent Australian Special Forces aboard to stop Captain Rinan from landing the refugees, who were sent to Nauru after the ‘Pacific Solution’ was hastily put together in four days. Howard said at the time, "We will decide who comes to this country and the circumstances in which they come."

This is not the place to go into the pros and cons of Australian policy; I will only say that despite all the flutter, the numbers of these seaborne refugees heading for that nation of immigrants is small. They get disproportionate attention, though, thanks to their somewhat spectacular mode of attempted entry. They also expose themselves to criminal elements and crazy risk.

Masters of ships that sight boat people today are in a tighter spot than ever, for there is an additional security threat that these refugees potentially represent- one that was absent during the Vietnamese boat people days. Those of us who were sailing then remember the horror stories of Masters ignoring- illegally and inhumanely- overcrowded boats begging for rescue, or just food and water. We remember shore side managers asking us to avoid the area altogether if possible and ignore the boat people if not. We remember spineless Masters complying with this illegal directive. This time too, shipping has already begun to behave against the laws and traditions of the sea: a bunch of rescued refugees told Australian media last month that five ships passed them and their friends who were in the water for two days but refused to stop.

I will not defend such behaviour- there is no defence- although I am well aware of what promotes it. The fact that governments around the world routinely propagate policies that are dangerous both to the refugees and to the crews that choose to rescue them is no excuse for a Master to abandon drowning men, women and children at sea. The fact that shortmanned crews on cramped ships cannot easily accommodate- leave alone control- tens or hundreds of aggressive and desperate refugees is no excuse for manslaughter. The fact that the world does not re-examine is treatment of seaborne refugees and the cruel systems that govern this treatment is no grounds for cold-bloodedness.

Final idle thoughts: does shipping need armed guards to protect its crews from rescued refugees in ‘boat-people waters’? I am not advocating shooting boat people in the water, I hastily clarify, just wondering if armed guards will protect crews against aggression from survivors.

And, does the ISPS code- that has failed spectacularly to protect ships and crews from boat people, terrorists, pirates and robbers alike- need to be thrown in the bin at once?
.

I dont know what to say. This blog is fantastic. Thats not really a really huge statement, but its all I could come up with after reading this. You know so much about this subject. So much so that you made me want to learn more about it. Your blog is my stepping stone, my friend. Thanks for the heads up on this subject.