Kitty litter and the STCW amendments. 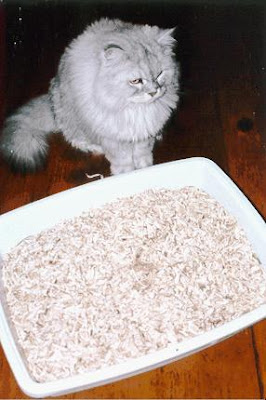 Never mind that the war is being lost: the good folk at the Manila STCW conference did what the Americans would love to do in Afghanistan and Iraq: declare victory and go home. Meanwhile, in the wake of the ‘Manila amendments’ (this nomenclature will long cause heartburn to many a presumptuous Indian) will be found the usual debris of the dashed hopes of seafarers.


Bluntly put, the Manila amendments read like a business plan and not a serious attempt to address issues related to training or fatigue of watchkeepers at sea. They results are the maritime education industry’s wet dream: the new requirements and “guidelines” will open up new revenue streams for these MET businesses that have proven to be largely substandard in all major seafarer supplying nations of the world.

Regardless, new training will be required in ECDIS, “marine environment awareness” (whatever the hell that is), dynamic positioning systems, navigation in polar waters, leadership and teamwork, security, liquefied gas tankers and OSVs, to begin with. Later on, we will be blessed with new training and certification for electro-technical staff. And, in a pathetically hilarious interlude, “New requirements for security training, as well as provisions to ensure that seafarers are properly trained to cope if their ship comes under attack by pirates.” (Cope? What is cope, please? Is it like a cop out?)

Fatigue, the second major issue, has been covered in the usual blinkered and cynical manner, and is, in a way, a testimony to impotence. At a time when present rules are universally ignored and ships are operated every day with fatigued watchkeepers, the IMO, in its infinite wisdom, ignores this blatant non-compliance. It admits, though not in as many words, that it cannot do anything about Safe Manning Certificates that are within the purview of Flag States (who, as we know, have no interest in making their flags less attractive to owners). Instead, the STCW amendments come up with new provisions for hours of rest for watchkeepers: ten hours minimum a day, 77 hours a week and with the usual claptrap of details and exceptions. Is this the best we can do, two decades after the issue of fatigue surfaced?

All that I foresee, because of all this ballyhoo, is a fudging of rest period records on an even bigger scale post the Manila amendments. I do not know anybody who seriously expects anything different. Ten hours a day? Seventy-seven hours a week? I hear the industry scoff: what do you people think this is, a luxury cruise?

The third major issue addressed was related to certification- measures to prevent fraudulent practices and other such subjects. Seafarers can move along: nothing much for them here either.

The problems I have with the Manila amendments are many, but the continued myopic system of regulation, guidelines and amendments has to be my biggest objection. Consider:

Thank God, I don’t intend to sail anymore. Besides the obvious reasons, I cannot think of anything in the Manila amendments that will greatly promote safer seas or cleaner oceans, or indeed make the career any more attractive for a new seafarer- another IMO objective, at least on paper, in this “Year of the Seafarer”.


To end, a short story: We often leave a large plastic tray filled with kitty litter when we go out for the weekend. The cat does the dirty deed in it, and then covers the waste up by pawing around and covering up with clean litter. The kitty litter is then good to be reused again. And again, after some more pawing and covering up.

Thing is, once in a while the old faeces has to be cleaned up to keep the tray clean, else the cat will just not use it. Perhaps we should have done that first, this time with the Manila amendments, before we poured new litter into the same old bin. Maybe there is a lesson for all of us in there, somewhere in the kitty litter.
.