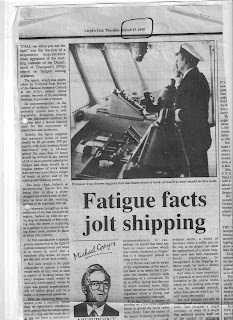 I have in front of me an article from Lloyd’s List that refers to a UK Department of Transport report on fatigue among seafarers. Michael Grey’s article is titled, “Fatigue facts jolt shipping’; the report Mr. Grey refers to is written by Professor Ivan Brown of the Medical Research Council.


The author comments on the report, “its recommendations on the control of seafarer’s hours will probably ensure that it will regrettably disappear forever in fathomless archives, to appear after a decent interval only for the enjoyment of researchers and academics.”


What’s new, you ask? What is new is that the article is almost twenty years old. It appeared in Lloyd’s List on March 15, 1990. I found it amongst the junk I have collected over time.


Some of the academics here will point out, of course, that we had a STCW convention a few years later that addressed this problem. Some may even forget to remind us that not only these (and such subsequent) reports have disappeared forever from our consciousness, even the STCW convention as it pertains to fatigue rears its ugly head only at decent intervals these days, and is otherwise largely ignored. Compliance is routinely fudged; the record of watchkeepers working hours and rest periods at sea is often unadulterated fiction.


In 2006, quoting a comprehensive survey approximately a decade after the STCW convention first came into force, the ITF reported : “One in four seafarers said they had fallen asleep while on watch. Almost 50% of seafarers taking part in the study reported working weeks of 85 hours or more. Around half said their working hours had increased over the past 10 years, despite new regulations intended to combat fatigue. Almost 50% of seafarers surveyed considered their working hours presented a danger to their personal safety. Some 37% said their working hours sometimes posed a danger to the safe operations of their ship.” Things did not get better over time; as we know very well, they got worse.


Two years later, in February this year, the UK’s Maritime Accident Investigation Branch took the unprecedented step, after an investigation into the ‘Antari’ grounding, of a) directly blaming the IMO for failing to address this issue even after a similar MAIB safety report (concerning fatigue) was forwarded to it two years earlier and b) asking the UK government to unilaterally take action to address the safety and environmental risks in British waters caused by seafarer fatigue. The MAIB ‘Antari’ report was scathing; unusually strong phrases like ‘Seafarer working hours are close to slavery’, ‘Watchkeepers routinely falling asleep’, ‘Ships are unguided missiles” and ‘Just a matter of time before there is a catastrophic accident” were used in the report: a sign, perhaps of the frustration the MAIB felt.


What had the IMO to say in reply? Well, as usual, not a lot. It confirmed that the UK had submitted a proposal to the Safety Committee, fully two years ago, asking that “an auditable procedure for establishing vessels’ safe manning levels should be introduced”. That was all the IMO did, though I am sure some impressively worded correspondence has been produced in the interim. I am also sure that the matter is being taken seriously by the mandarins at the IMO even today. We must realise that only six months have passed after the MAIB report, and that these things take time, as the twenty year old report quoted in Lloyd’s List and the 2006 report quoted by the ITF proves. I read these periodic reports with bemusement: all the regulators really need to do is to visit a ship to know what is happening on the ground, and how commonplace fatigue at sea really is.


When it comes to the resolution of the fatigue issue, the sailor may be forgiven for thinking that he is actor Bill Murray in the movie ‘Groundhog Day’, doomed to living the same day over and over again for eternity. Even worse, there is no Andie Macdowell on the horizon either; an event that would help considerably in keeping him awake on watch, I think.


Of course, many industry bodies have raised the subject sporadically and anaemically. Pilot associations, Cargo and Classification society surveyors have complained about tired crews unable to function effectively. Port State Control officials have mentioned seafarer fatigue in some of their reports, and so have individual Superintendents and the like. Some organisations even have online and offline forms for reporting fatigue. Accident statistics are legion too: the high percentage of accidents caused by human error and the alarmingly high odds that a chronically fatigued seafarer will make mistakes and cause accidents have been underlined ad nauseum in a plethora of seminars across a spectrum that seems to cover all points of the proverbial compass.


However, all this, again, is academic; because all of us, at sea or ashore, need no reminding that the problem exists. Compiling data is not an alternative to solving the problem. In addition and as far as the commercial industry is concerned, there is no real problem. A fatigued seafarer is the least of their concerns anyway.


I am afraid that the maritime industry has become immune to this issue; Groundhog Day has played out too often. The repercussions of following the STCW convention on fatigue are seen as too expensive. The requirements of additional officers and crew, or even (gasp) an additional Master (or, perhaps, taking some administrative functions ashore) that would undoubtedly be required to fully comply with the rules is seen as unnecessary. I cannot see any Owner doing this unilaterally, raising operating costs and making his ships uncompetitive in today’s bloody marketplace. Which means that, as usual, additional requirements will have to be mandated from ‘above’. I do not see that happening easily either: the benign nexus between industry bodies and the commercial world is usually at the expense of the seafarer.


The only way we will get some traction to begin addressing this burning issue (that has been ablaze for two decades or more, as shown) is this: We need a series of spectacular and catastrophic accidents, the root cause of which is found to be seafarer fatigue. We need to see these well publicised in mainstream media, as they probably will be if beaches and seagulls coated with oil are a result. Only then will there be sufficient pressure put on the industry, including the regulators, which will make everybody act immediately. Remember the ISPS code that happened within weeks of 9/11? That worked. Something spectacular. Something that presses all the buttons in a way that a fatigued mariner never will, even if he suffers long term health deterioration as a result of chronic fatigue. We in shipping are famous for post disaster regulation: maybe that is the only way we know. Alternately, we can prepare to relive Groundhog Day for another twenty years.


In 1990, Michael Grey commented on Professor Brown’s report thus: “Perhaps the report is a signal to start off with a completely clean sheet and try to adapt the way of a ship to the working practices of a human crew rather than the other way around”.

Sorry, Mr. Grey, the cleanest sheet we have been able to arrange, after two decades, is the murky spreadsheet recording individual watchkeeping working hours at sea; it may interest you to know that not only are the figures routinely doctored, fudged sheets are sometimes even photocopied for use next month!