The map is not the territory 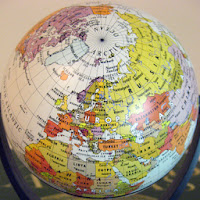 When Flemish cartographer Gerardus Mercator published his first world map in 1569, the reason for doing so said it all- "(A) New and augmented description of Earth corrected for the use of sailors," is how he described it. The poor guy could not have dreamt that his projection of the earth’s surface on a flat piece of paper would cause, four and a half centuries later, sporadic expressions of distress and accusations of conspiracy.

Navigators may skip this paragraph; for the others, a brief explanation of the ‘Mercator’s Projection’: Imagine the earth’s surface as the peel of the orange above, the planet’s longitudes represented by the ‘longitudes’ on the peel that converge at the North and South ‘poles.’ Now, imagine that you pressed that peel flat upon a table and made the ‘longitudes’ parallel to each other by stretching them out. You would then have a Mercator Chart (except that is actually done a lot more mathematically!). There are distortions of the parts of the earth, obviously, by virtue of the longitudes requiring to be stretched apart to make them parallel, except at the equator. This stretching automatically also stretches, on that chart, the land or water masses between longitudes. These distortions increase with latitude (since greater stretching is required away from the equator) and are maximum at the North and South Poles.

For many reasons mainly to do with courses, bearings and loxodromic curves, the Mercator Chart was ideal for sea navigation; the vast majority of navigational charts use that projection even today, as we know. The problem, if there is one, arose when Mercator’s projection began to be used widely for making maps of the earth and became incrementally commonplace; it remains the most popular projection for all maps. Its success has meant that the Mercator map is what most of us visualise when we think of the world, nations- or their size. Our mental conception of the world is based on the Mercator projection, and this is problematic. This is what is criticised.

For, amongst other things, land masses like Europe that lie in higher latitudes appear much bigger than they actually are- because they have been stretched more on the map - while nations in the lower latitudes suffer little distortion, and so appear much, much smaller. And therein lies the rub, and fodder for Mercator’s critics, who see a great European conspiracy in the fact that Africa is the same size as Greenland on a Mercator map whereas in actual fact Africa is 14 times larger. North American and European regions similarly ‘benefit’- Alaska is a fifth the size of Brazil but takes equal space on that map. These critics say that the Mercator Projection is a result of colonial influence- even conspiracy- downgrades the size (and, presumably in our size-matters mind set, also downplays the importance and culture) of countries in Asia, Africa and Latin America that lie closer to the equator, while bloating the sizes of countries in Europe and North America- and their importance.

Frankly, I think that the conspiracy theory is balderdash, mainly because the fact is that the Mercator chart was rolled out because it was the most practical projection for seagoing navigation; it still is, except near the North or South poles (where distortion is infinite).  Mercator did not formulate his projection to make a map of the world. The fact that a lazy world dominated by Europe at the time did nothing to correct the widespread use of maps using this projection (repeat maps, not nautical charts) does not make any difference to this fact. The fact that many of the countries that suffer from Mercator’s distortions are former colonies is a coincidence. The fact that many of these countries are poor and less important today is because European colonisers looted and pillaged them for centuries, not because a European guy made a damn good nautical chart.

So move along, move along; there is no conspiracy here.

Cartographers criticise Mercator’s Projection too for reasons to do with accuracy, pointing out that other projections exist that distort less. They ignore, sometimes, the fact that any projection of the surface of a spheroid on a flat piece of paper will distort some attribute or the other. There can be no ‘accurate’ map of the earth, in that sense. It is more a question of what kind of distortion is acceptable for what that piece of paper is supposed to be used for. A Mercator chart is supposed to be used for navigation. It has proven itself fit-for-purpose. It ain’t broke; don’t fix it.

It is not Mercator’s fault that the world took his projection and started teaching geography with it.