Inside shipping, the Philipp story: the seas are alive with the sound of robbery. 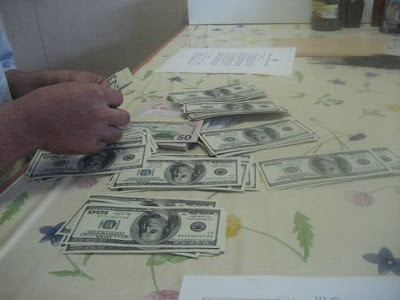 Money being counted on the Philipp to pay the crew


Its founder, the made-famous Von Trapp and his wife Maria, were the inspiration behind 'The Sound of Music', but that halo has been decisively knocked askew today. The shenanigans of Hamburg based shipowners Vega read like the script out of a French- or should I say German- bedroom farce; the only difference is that it is the all-Filipino crew on one of their ships that has been rolled in the hay. Twice.


The story so far: The vessel Philipp (ex-Beluga Meditation) arrives in Sweden last year. There is no ITF approved agreement in place with respect to the crew's wages, so the Swedish unions insist that one be signed. A year later, ITF inspector Tommy Molloy boards the ship in Liverpool, UK, and finds that two books of accounts are being maintained with respect to crew wages– one in accordance with the Standard ITF Agreement and the other in accordance with the German VER-DI TCC Agreement. The crew, of course, are being paid much lower wages as per the latter. The ITF says that the difference payable to the crew totalled to USD 230,000. Owners agree to pay.
All par for the course so far; even if shipowners from the First World like to pretend they are all above board and terribly concerned about crew's rights, we know better. So Vega did what any self-respecting shipowner does when a part of his body is in a sling - it admitted to the Gibraltar Flag and the ITF that the Philipp accounts were 'wrong' and arranged to pay the quarter million or so to the crew in Liverpool on October 4 this year. It also flew in representatives from its Hamburg and Manila offices who surreptitiously boarded the vessel and waited until the money had been paid and the ITF and Port State Control officials had left. They then threatened the crew with legal action (and, I suspect, blacklisting and other threats too, as is usual) and had them return all the money to Vega.
The story did not end there; there is much more to come. For, in Tommy Molloy's words, "Within hours of the payout I returned to the vessel with port police officers and my suspicions that the money was to be taken off the crew were borne out. The crew had been sufficiently threatened by Vicente Fedelicio of Vega Crewing in the Philippines - who had travelled from Manila to Liverpool to be on board for the payment along with the German owner's representatives - to hand back the money, telling the police they had done so voluntarily because they did not want their wages."
Crew did not want their wages? Come on, Mr Fedelicio, that is not even specious. It is ridiculous. Couldn't you think of something better?
So Vega did, again, what any self-respecting shipowner does when - you know when. Two weeks later, on October 18, they paid the crew the quarter million once again.
But wait. There is still more. Because seven crew signed off soon thereafter, in what was apparently a normal rotation. Vega's representatives called the crew at their hotel in the UK - to meet and probably threaten them again- but failed since Molloy was escorting them. (When confronted, they told Molloy that they were inviting the crew for dinner! Maybe it was to be the last supper).
Anyway, the crew flew out from the UK the next morning, but, as you can gather by now, there is more. This is shipping; there is always more.
In Manila, Vega staffers- and hoodlums, judging from Philippines' news reports and ITF statements- waylaid six of the crew at the airport (they missed the seventh, who left from a different exit) when they returned.  According to two witnesses, says one Manila report, the crew were hijacked, put into vans along with their families who had come to receive them at the airport, taken to Vega's office, threatened- including, can you believe it, with legal action for theft- and forced to give back their wages. Again. The famous Fedelicio- the crewing Manager, it turns out- was reportedly again in attendance. As I write this, Vega is said to be trying to blacklist the seventh crewmember at the POEA, the country's overseas employment agency, since he still has his money.
I wish I could say that this story- that is still playing out- will have a happy ending, but it will not, because this is an old story we have heard many times before. The fact that a well-regarded European shipowner has conspired to first defraud, then extort, threaten and bully the crew to rob them is not new either. In many ways, this is the true face of shipping, and the ease with which shipowners shortchange crews is well known here. And although many shipowners do not go as far as Vega seems to have done, many would if they felt they could get away with it. Meanwhile, they defraud mariners of their legitimate wages and rights in a hundred different-smaller-ways. The difference is only in the degree to which they do so.
Such is shipping, unfortunately, and, with the recession upon us, it will get sucher every day- just as it did in the eighties. I have faith in the industry.
I wish I could say that this story will end- like the Sound of Music- with the Von Trapps escaping the bad people over the hills and into the sunset. I wish I could say that the company and its people will be criminally prosecuted - either in Germany, Gibraltar or the Philippines- and made to pay for their crimes. I wish I could say that the crew will get their dues.  I wish I could say that justice will be done.
But I can't say that all that will happen with even a hint of conviction, because this is not the Sound of Music. This is not a Hollywood story; it is a mariners' tale.
Posted by manu at Thursday, November 24, 2011