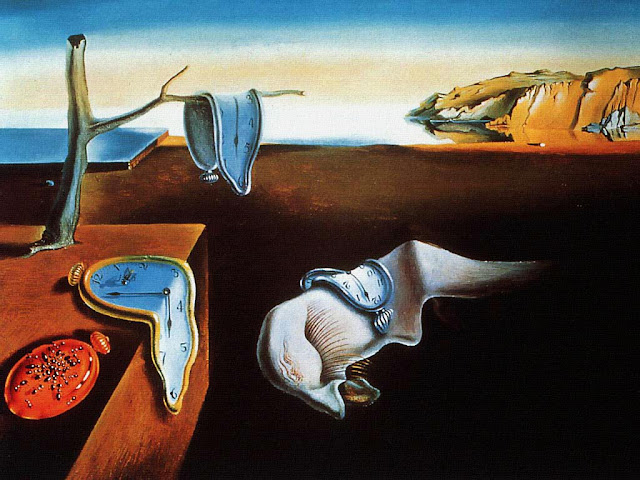 'The persistence of  Memory' by Salvador Dali

Surreal, that's what this is.

Don't laugh, but the Philippines Department of Labour and Employment reportedly announced last week that an antipiracy course would now be part of the requirements for all Filipino seafarers. DOLE Secretary Marianito Roque told reporters that the training would be provided to about 260,000 Filipino seafarers. Roque went on to claim that this would also help the department to “increase the level of qualification of the capacity of a seafarer.” and that individual companies are to pay for the training.

Hmm.  Did he really say more than a quarter of a million Filipino seafarers? Mind boggling, the implications of that figure. Sounds like a multimillion dollar business opportunity for somebody, running antipiracy courses. Multiply 260,000 by even 150 dollars as course fee and you get around four million dollars. Hell, that is the ransom payout for a couple of ships. And what, pray, will the course content consist of? Let me guess: a module on 'how to recognise a rocket propelled grenade launcher while crapping in your pants', perhaps? Another module on how to plead for your life in basic Somali? Or how to fill up an ‘ideal hostage’ checklist? Something like that, I presume.

Here's what I think.  One, how soon will India ape this Filipino absurdity? (Our stalwarts must be cursing that the Philippines beat them to it). Two, everybody seems to have given up on actually fighting Somali piracy and winning. Three, everybody and his mother in law in maritime education will want a piece of this new lucrative business opportunity. Four, shipowners may try to use the 'trained antipiracy crew on our ships' claptrap as a marketing tool with prospective charterers or to reduce piracy insurance premia. Five, the seafarer will continue to get jacked and hijacked. Six, this training will be used as an excuse not to take other steps that may actually be effective. Seven, any dimwit will tell you that this will go the ISPS way so why is this nonsense even being pursued at all? Eight, an Indian manager will say, soon enough, that Filipino's make better crew because they are anti piracy trained: I think that is approximately when I will throw up.

As for “increase the level of qualification of the capacity of a seafarer,” I have seen hundreds of Filipino seafarers reporting to me with joining papers and photocopies of course certificates as thick as dictionaries and qualifications that look impressive as hell on paper. Few live up to what the dictionary suggests. I expect this antipiracy hokum to be even worse, because it is more unreal.

My wife will say that I am jealous because everybody else is making money, and maybe she will be right. I really need to get with the program, I think, which is why I now propose some new courses that we in India should start asap. We are the global leaders in conducting futile courses; how dare somebody else vie for that hallowed spot?

So, with much thought and without much further ado, I propose that the following courses be rolled out immediately in India. (I have thoughts on many others that I will divulge to interested parties on payment of a small fee):

Garbage Management Course: This approved course will teach seafarers how to pick up, segregate and collect garbage for disposal as per the rules. Included will be modules on shallow breathing techniques while carrying putrefying stuff, computer based training on stencilling 200 litre drums with approved labels and practicals on new brooms sweeping clean. Not included will be training on the disposal of management, regulatory or other official garbage of any kind; that will make the duration of the course too long.

An anti criminalisation course: This one will train seafarers in one of the most critical aspects of their profession, and I am therefore surprised nobody has thought of it so far. From making seafarers aware of the latest rules that are supposed to guarantee them fair treatment, the course will move (quickly, before anybody asks too many questions) to other modules like ‘Keeping a stiff upper lip while being blamed for nothing and everything’, “Keeping mum under pressure”, ‘Approved daily routines in gaol’, ‘Checklists for Alcatraz’, ‘Involuntarily extending contracts’, ‘ Appreciating local cuisine behind bars’, a long module on ‘What not to expect from employers after being arrested’ and  a very short one on ‘What to expect from the Government of India when ditto’. Others may include operational and Company specific training on ‘Reporting from the slammer” and ‘Proven CYA techniques’. This course will be approved by the Administration. Anybody asking ‘What administration?’ will be thrown into jail at once.

Finally, to complete my Kafkaesque soliloquy and business plan, I am seriously contemplating patenting and rolling out a postgraduate management course for the shore based maritime industry. This two year full time course will target international and national regulators, industry body representatives, shipowners and miscellaneous shipmanagement, insurance and such personnel. Incidentally, I plan to collaborate with a premier management institute in India to ensure excellent content, infrastructure, delivery and hype. Details will be announced later, but the working title for the degree that will be awarded on satisfactory completion of the programme, mainly because I like the acronym this makes, is ‘MBA (Shipping Hypocrisy In Toto)’.

A midterm internship is compulsory, and will require that each student demonstrate that he or she has shafted a mariner at least once.