Letter from Africa: A double-edged sword

Why piracy will reduce off Somalia 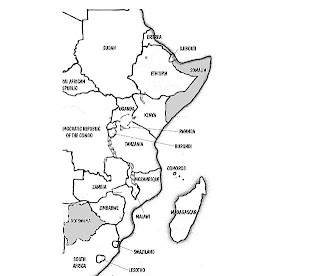 President Sheikh Sharif Sheikh Ahmed’s return to power in Somalia at the end of last month may once again raise the fears and the hackles of Western nations and their media, although first reports from Washington appear to be less strident than they were under the neocon Bush administration that had dismissed his first government, literally and militarily, as henchmen of Al Qaeda. Regardless, I am willing to bet Ahmed’s second Presidency will do one thing: put pressure on Somali warlords and reduce attacks on merchant ships in that region. In fact, Ahmed has vowed to fight pirates on land, calling for international assistance to help rebuild the Somali army to effectively do so.


Regrettably, the same Somali developments, coupled with those in Botswana not very far away, point to a resurgence of radical Islamist groups, including Al Qaeda, in the region. The news is not all good; the sword has two edges.


Ahmed, a former schoolteacher, entered politics after warlords kidnapped one of his students in Mogadishu in 2003. Eventually elected Chairman of the Union of Islamic Courts which came to power after driving out US backed ‘anti terrorism’ warlords from the capital, his government lasted just six months in 2006 as US backed Ethiopian troops toppled him; they claimed that Ahmed was linked to Al Shabaab, a militant Al Qaeda linked group. Part of the African Union also played along with the United States. Ahmed fled, eventually to Djibouti. Bush and the neocons were probably just ideologically opposed to the UIC and there was no real evidence directly against Ahmed, because two and a half years later, Washington calls Ahmed a ‘moderate‘today.


It is important for the shipping industry to realise that during the few months the UIC was in control of much of Somalia before being ousted, there was a marked improvement in the number of attacks on ships around Somalia as the UIC cracked down on the warlords. We all know what happened in 2007 and 2008 after Ahmed’s ouster: an escalating eruption of violence and hijackings against merchant ships by the same warlords, whether backed or not by the Ethiopians (and by proxy, the US)


The international community has remained suspiciously silent on US involvement in Somalia over the last few decades. The demonisation of the UIC by western media has contributed to the support successive US governments (especially under Clinton and Bush) have given to warlords in that country. Unfortunately, Western media has a disproportionate hold on world opinion. My truth is bigger than yours is, you see.


In many ways, the anarchy in Somalia is a direct result of the war between the US and Al Qaeda, with the Ethiopians and many warlords on one side and Al Shabaab on the other. That some of the warlords were kingpins in the pirate business was ignored by everybody. The US tarred all Islamic groups with a broad brush; the result has been the rise of militancy and lawlessness and a defeat for the US. Collateral damage: ships and mariners passing through the region. Piracy flourished, with many fishermen claiming that the decimation of their fishing grounds by foreign trawlers and the dumping of toxic waste (including nuclear waste) in their waters by western interests forced them to take to piracy. Meanwhile, the crimson tide swept to sea and rocked us all in the business, whether ashore or afloat.


All that should improve now. Make no mistake, though. Piracy will not disappear tomorrow. The Al Qaeda linked Al Shabaab is very much alive and kicking and controls large swathes of Somalia. It has always been linked to pirate groups. Al Qaeda has admitted, even boasted, of their plans for the Gulf of Aden. And don’t forget that the Defence Minister in the 2006 UIC government, Sheikh Yusuf Indohaadde , allegedly appeared in Al Qaeda propaganda tapes, and that terrorist training camps are widely believed to have existed in Somalia way back (and since?) in 2002.


Interestingly, reports have emerged out of Botswana this week linking events there to Somali piracy. Besides the existence of sleeper cells of the terrorist organisation in that country, scores of suspected Al Qaeda operatives being detained for deporatation and worldwide passport fraud highlighted by a number of people being arrested across the world in recent times while travelling on Botswana passports confirm this. The target for the sleeper cells? The FIFA World Cup next year in neighbouring South Africa. Equally alarmingly, there are expressed fears that Somali pirate money is being money laundered by these operatives in Botswana. The link is getting stronger and wider.


It is amusing really, like a Spy vs. Spy page out of Mad magazine. The US backs an old Somali enemy, Ethiopia, and warlords, against Islamic groups. But many warlords are pirates who are linked to Al Qaeda, the Enemy No. 1. An Islamic government that fights piracy is toppled, radical Islamic groups spread their tentacles in the country and beyond, piracy hits the roof, the ousted Islamic Group is back in power and is now called a moderate government by the US. Net result? Al Qaeda or its allies controls large areas of Somalia today and the anarchy has expanded into Botswana. Piracy flourishes still, as is evidenced by the record ransom payment for the ‘Faina’. And Western navies are almost stepping on each other’s toes in the Gulf of Aden trying to control the monster that some of them helped create. Amongst them, that of the United States.


Strange world, this. And getting stranger by the minute.
.