I have found a way for seafarers to tackle Somali piracy and emerge winners every time. The recommended and modified Saltshaker plan (aka Sitting Duck defence, version1, copyright 2008) is reproduced below. Subject to your approval, of course. Please be gentle. 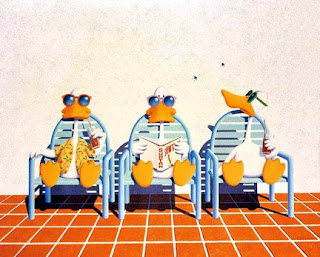 Prior to the vessel entering pirate waters, a new flag to be hoisted on the main mast: a replica of Michael Bedard’s “Sitting Ducks” (see above). Note the bullet holes behind the duck that ducked.


At the first sign of the pirates closing in, alarm bells to be rung and crew mustered on the bridge. The new ‘pirate attack contingency plan’ to involve one selected athletic crewmember who is an excellent swimmer standing by with walkie talkie.


Meanwhile, the Master tries his rusty and shaking hand at evasive manoeuvres; he may even attempt a Williamson’s turn and log it down in triplicate as per the relevant manuals. (Be careful when coming on to the reciprocal course, though, as you may hit a pirate boat, which is against good seamanship). Another officer sends out the appropriate distress signal (and logs it down for fear of being hauled up for a non conformity later. Come what may, the paperwork must always be in order.)


After sufficient time has elapsed to dispel pirate suspicion that this attack is too easy, suitable lee to be made for the pirate boat and said athletic crewmember to be sent on deck to receive the gentlemen. Engines to be simultaneously set for maximum speed, autopilot engaged, after which the Master and the rest of the crew go into stealth mode and make their way to preplanned locations simultaneously as per the stamped and approved ISPS anti piracy contingency plan (more later, unfortunately).


The athletic crewmember welcomes the pirates on board and reports on the walkie talkie, “Bridge, pirates aboard” to keep up appearances and look seamanlike. He then escorts them to the bridge from inside the accommodation.


The pirates are not too puzzled at finding the bridge empty; they should be used to people disappearing from their sight in fear. In any case, they start fanning out everywhere as per their own approved and stamped ISM manuals, while our sole crewmember goes to the bridge wing and looks around and up as if trying to find the Officer of the Watch (OOW) on the monkey island. He can’t see him easily, so he goes right to the extremity of the bridge wing.


He then jumps into the water and swims like hell away from the ship.


Meanwhile, the rest of the crew have abandoned the ship by liferaft or lifeboat or similarly jumped overboard even as athletic crew was escorting the pirates. Note: It is preferable that at least survival craft is in the water (of sufficient capacity blah blah and complying with all the irrelevant regulations in this case) else, things can get slightly hairy, especially for non swimmers. It is also recommended that due care be taken while abandoning the vessel at her maximum speed, which is not normally recommended. However, beggars cannot be choosers, especially if they are sitting ducks).


Anyway, the ship is now proceeding at flank speed with confused pirates on board searching hither and thither for the crew. Somewhat like those ‘Speed’ movies which are so popular. Shall we call this one Speed 6?


Remember that the crew (and at least one survival craft) is in the water. Crew are picked up by, or make their way to, this craft, where they wait to be rescued by one of the numerous navies cluttering the seas in the region who should be able to do something simple, like receiving a distress message and acting on it. If they take too long, the crew polishes off the survival rations (and logs it down). Athletic crewmember gets double rations on the quiet. It now gets interesting. In case there are any pirate boats with armed pirates in the water along with our survival craft, what can they do?

a) Kill the crew? What for? The ransom they get is for the ship, which seems to be, literally, on its own trip. Might as well save the AK47 ammo.
b) Rescue the crew? Likewise. Like the dog that chases a car, what will they do with the crew after they have caught them?
c) Try to chase and board the ship themselves? Let them.


As for the pirates on board the hijacked ship, well, either they have the expertise to navigate and work the engines or they do not. If they can navigate, they lower the duck flag, proceed to Eyl remembering to go astern before dropping anchor as per their ISM manual, and make their usual demands (Easier on the owners, too, they don’t have to pretend they are paying ransom for the crew, or handle pesky relatives demanding the return of seafarers in one piece).

If the pirates can’t manoeuvre the ship, they leave the duck flag up and wait for the fuel to run out, or the ship to hit something or, alternatively, they jump into the water themselves. By the time they figure out that nobody is on board, they should be miles away from the crew anyway. Meanwhile, coalition navies make plans to rappel down dramatically from helicopters or otherwise board the ship to apprehend the pirates: the usual commando stuff they love to do but don’t seem to do enough.


Wait a minute! Hey, maybe the navies cannot do that at all! Because, is the ship technically hijacked or is it abandoned now? If the latter case, are the pirates salvors? And if so, is salvage likely to be higher than ransom? And if so, the plot has really thickened, has it not? (Note to myself: Consult maritime legal experts. Consider alternative career path in Somalia. Remember to take all safety precautions while boarding ships at high speed. Remember you are not young anymore.)


Flash of inspiration again. What if I modify the plan and have the Master and crew abandon ship even before the hijackers come aboard? What would happen if crew abandoned ship whenever they saw a suspected pirate boat approaching? And why are the Rules of the Road silent on the critical subject of ‘Responsibilities between lifeboats being lowered and pirate boats coming hell for leather for you?’ (I hope they keep short rapid blasts out of this rule, we are all jittery enough as it is)

The possibilities are endless.


In conclusion and after repeatedly going over this plan, I do believe that it is foolproof and workable. I am now going to take it to the relevant authorities for necessary approval. I request the IMO to pause in making their usual rules and resolutions, dig up their dusty ISPS regulations (there they are, at the bottom of that dusty pile!), and start modifying the ISPS code asap and accordingly, incorporating my practicable plan.


Let us have something that works, for a change. Nothing else has.