The Moor's next sigh: spreading terrorism and piracy in Africa 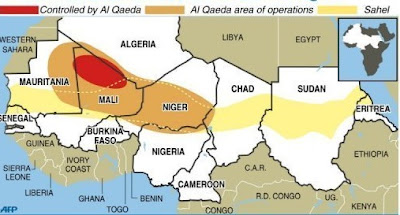 
Gen. Carter F. Ham, Head of U.S. Africa Command, was not talking about piracy last month when he warned of the threat of a pan-African Al-Qaeda linked terrorism network capable of endangering Western interests across Africa. He wouldn't: I sometimes feel that the world needs a press release issued by pirates and terrorists announcing their latest joint venture before it acknowledges the depth of that nexus. Perhaps the business of anti-piracy is so lucrative in the West that this will not happen anyway, although the number of analysts who link Somali piracy to terrorists- and not just terrorists in Somalia- is increasing. In this connection, Indian Defence Minister Antony's recent cryptic comment that "some other powerful forces sitting somewhere else" were behind piracy is actually quite revealing (and IMO Secretary Mitropoulos' quick rebuttal- “We don’t think the Somali pirates are backed by any terror organisations" even more so, reflecting the head in wet sand thinking that has become the hallmark of that organisation that seems to be besieged with the hidden agendas of some of its members.)
The truth is that terrorism and piracy are natural allies with common interests.  They are loose allies today in Somalia, admittedly, with financial, operational and joint training links. I have no doubt that terrorism and piracy will continue to do business together across Africa- and elsewhere. As West African piracy tries to increase- using Somalia as a template- alliances between terrorists and pirates will proliferate across that part of Africa because anarchy and crime are old lovers. The security and financial consequences for shipping will be huge in the Atlantic and Mediterranean coasts of Africa if the General is right. Multiply Somalia by three or five.
The Al-Shabaab and the AQIM, straddling the two ends of Africa, are not the only extreme Islamist groups in the continent (see map).  The map is slightly dated; for example, there have long existed Islamist elements in Algeria and Morocco- and of course, thanks to NATO- now Libya to the north. The political future of Egypt- an ideological source of Islamist thinking- is unknown. The fear of a pan African terrorist consortium is real: of formed, it will stretch across the width of Africa and include Niger, Mali, Mauritania, Nigeria, Sudan  and Somalia- one of the homes of Islamist terrorism training today.
Gen. Ham pointed to the Shabaab in Somalia, Al Qaeda in the Islamic Maghreb (AQIM) in North Africa and Boko Haram in Nigeria as the three main groups that are working to coordinate activities. Generals have a habit of exaggerating to up their budgets and influence, but even so, there is enough corroborating narrative to take Gen. Ham's view seriously.
Consider:
Now for the good news. The major difference between Somalia and West Africa (or even the north, although the jury is still out on Libya and Egypt as I write this) is that the region has functioning governments who would loathe to see oil or mineral revenues hit- and so will take action much faster and more vigorously than Somalia ever did. This is not be as simple as it sounds, however; for example, much of Nigerian oil lies in the Catholic south of the country that is a target for the Islamist Boko Haram.
Another plus: unlike Somalia, the African west coast does not have natural safe pirate havens where hijacked ships can be taken to be held, so I have greater confidence that the level of anarchy seen in Somalia will not easily prevail in Western Africa.  Nigeria and Benin are already running joint patrols in the Gulf of Guinea; Ghana and Togo are expected to join soon. That said, piracy there can certainly increase manifold from present levels; it already has, this year.
For a change, shipping should look at the wider geopolitical and security picture and act while there is still time. Else, it will just repeat the Somalia (and now West Africa) experience elsewhere on the continent. We knew which way the wind was blowing there too, but we sat on our hands and so we are where we are.
Shipping should expect a diminishing level of involvement- oil or not- from NATO in African anti-piracy operations. It needs to promote solutions to its own problems, for once. It needs to become proactive in pushing these before the fire spreads. Even at its usual anaemic speed, shipping should start generating international pressure through all its emaciated bodies- industry associations, IMO and government ministries included- to strengthen and encourage west and North African nations to take action against both pirates and terrorists today. Beset as it usually is by lethargy and almost comatose as it usually is in response to anything substantial, the industry needs to nevertheless wake up quickly and smell the coffee.  Unfortunately, shipping is lazy and indolent; terrorists and pirates are not.
.
.
Posted by manu at Saturday, October 15, 2011