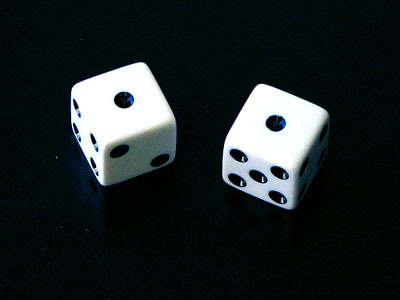 (‘Snake eyes’- two pips on the dice- is the lowest score a gambler can roll in a game of craps. A loser’s roll, obviously)
If the IMO, like its parent the UN, represents the will of the international community, then I have to say that where there is no will there is no way.

On the first of this month, the IMO’s Marine Environmental Protection Committee met, deliberated and failed to reach any consensus on proposals to cut emissions from new ships. Shipping is not covered by the Kyoto Protocol and is said to be responsible for 3 percent of global CO2 emissions. The meet threw up, once again, the huge chasm between the developing and developed countries that seems to be the norm on environmental issues these days.

Around the same time, the BBC reported that Russia is planning to float the first of eight floating nuclear power stations in 2012: Part ship, part platform, these vessels will be positioned in the Arctic circle to take care of the energy needs of a country that is increasingly targeting the exploitation of natural resources in the frigid Arctic. “The territory includes an underwater mountain range called the Lomonosov ridge, an area which some Russian scientists claim could hold 75 billion barrels of oil. This is more than the country's current proven reserves,” the Beeb says. Each Arctic nuclear station can stay twelve years onsite (what? no dry-docking?) without maintenance, and supports power needs for exploration and for 45000 people, the Russians claim.

Other recent events- the Norwegian/Russian deal on the Arctic, Russia accelerating the promotion of the northern route as an alternate (with Russian icebreaker assistance) to the eastern passage to China or Japan, the discovery of new gas and oil reserves off Greenland and the continuing mad race by some Western nations to exploit the Arctic- confirm my suspicions that activity around the North Pole will escalate exponentially, and very soon.


That, with its inevitable consequences on climate change, is bad enough. What is worse is that I see no regulatory body on the horizon that will moderate this change, make operations safer or mitigate environmental risks. Worst of all, I do not think we even know what we are letting ourselves in for in the Arctic. We sure as hell don’t know enough about the weather, or the impact of extreme conditions on men and machinery, or the devastation that would surely ensue if there is, say, a Deep Water Horizon incident out there. Besides the fact that there are extremely limited facilities for refuge in emergency, the race for the Arctic assumes, fallaciously as usual, that proper regulation and procedures will be in place. As things stand, they will not. We are ‘lassoing’ the ice using tugs and moving it away from platforms out there right now: we do not even know what impact this will have on the delicate polar ecology and whether the lasso will turn out to be a noose around our necks later.

It is clear to me that a) the maritime industries, with their abysmal record of self regulation, are hardly going to start properly regulating their operations in the North voluntarily anytime soon; b) The IMO, with its equally abysmal record of reacting to events (using the permanent out it has, like the UN, with its hand-wringing claims that it only represents collective will of member states and is thus hamstrung) , its snail-like speed of action and its general inability to actually solve problems, is the wrong horse for this course; c) The rift between the developing and developed world will widen- shipbuilding and ownership in the latter is growing, and fears that regulation on shipping will become a one sided affair impacting largely the developed countries are not unfounded and d) the oil industry, as the Deep Water Horizon incident has shown, controls governments, including those of some of the most powerful nations in the world today. Their gung-ho operations will continue as usual with the thin veneer of regulation that pretends to be workable.

Unfortunately, it is hugely naive to expect that shipping, or the oil industry- with the public perception of a dirty business run by shady operators- will see the opening of the Arctic as an excellent opportunity to clean up its act and turn perception on its head. To be fair, though, these are far from the only industries that pay lip service to environmental issues while continuing down risky, unethical –or illegal- courses, cutting safety corners and exposing the environment to potential catastrophe. But that is neither here nor there. What we need is this: We need an international body to regulate these international businesses, we need the regulations to be placed before we put even one more sailboat in the Arctic, and we need this body to be proactive and control safety and environmental issues as its only priority. The IMO is, right now, the only game in town, but it is a rigged game played by unwilling players with loaded dice. The game’s final score, to me, is inevitable. Snake eyes.

As for those Russian plans, I cannot help but recall Chernobyl, parts of which were kept running for sixteen years after the worst nuclear accident in history devastated the immediate area when four hundred times Hiroshima’s radioactive material was released into the atmosphere. Radiation levels rose across almost entire Europe. Thousands of children and adolescents have been reported with thyroid cancer in Ukraine and Russia since then. The full environmental impact of this disaster- a quarter of a century later- is still not known.

That was a nuclear power plant too.

Maybe it will take a Chernobyl in the Arctic before sense prevails; maybe we can step back from the abyss once again. Maybe we should get some workable rules in place. If we cannot, we should stop playing the game.
.